In its sixth generation, the Yonex V Core 100 has been engineered for higher spin. This update includes a red cosmetic, cutting edge spin technologies, Force Flex and string synch. Intermediate to advanced players will appreciate the updated feel, maneuverability, and easy power.  The racket is brimmed with power and spin, making it a deadly weapon for a variety of players. 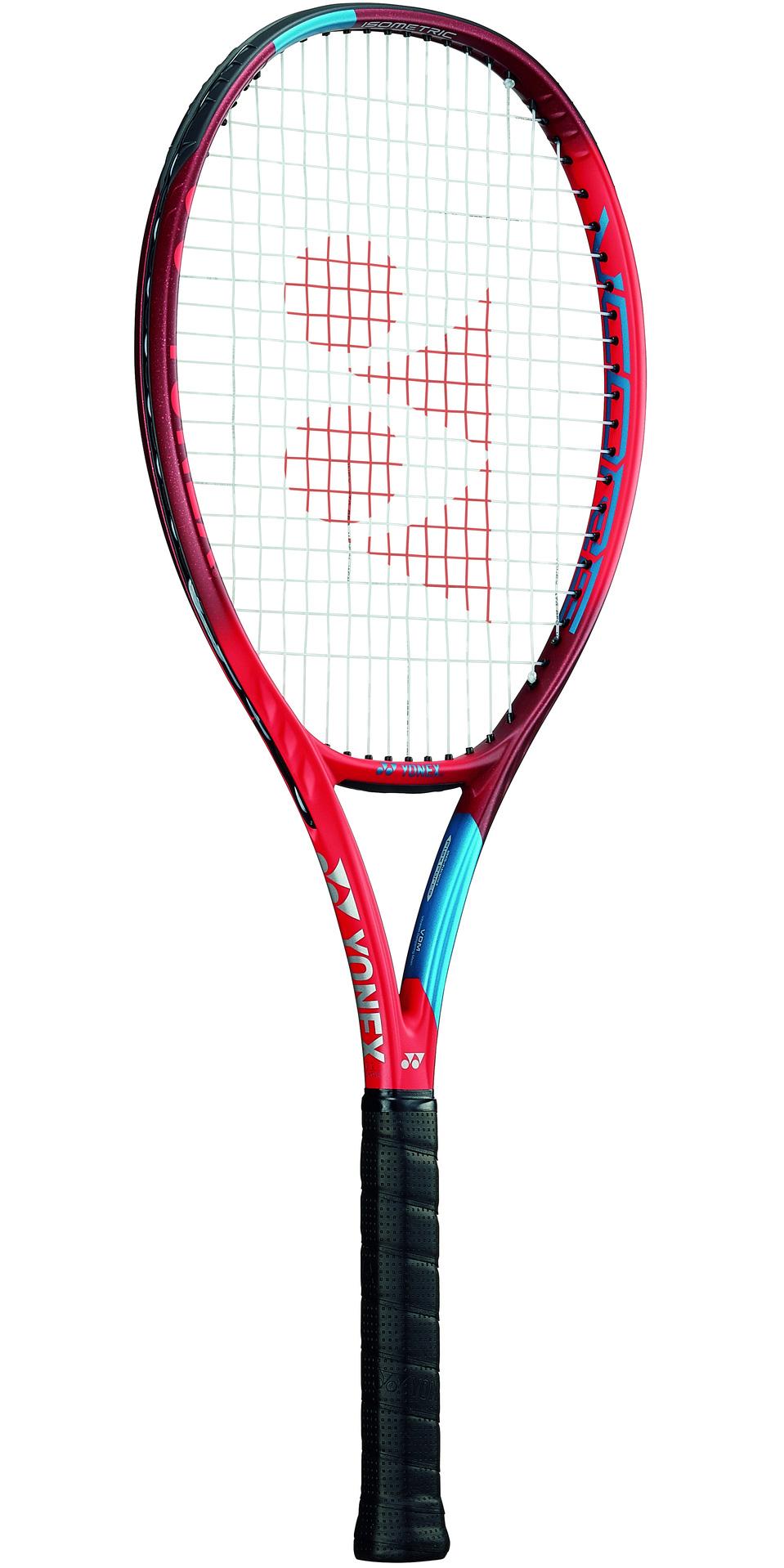 In addition to its signature technology, the Isometric head, which increases the sweet spot by 7%, the V Core 100’s Flex Force incorporates a resilient carbon nanotube structure that binds the graphite fibres together, increasing flexibility and snapback. The redesigned gromet system String Synch, contains inserted grommet nozzles in the larger frame hole, allowing the strings and nozzle to move together. Add the Vibrating Damp Mesh in the handle to increase comfort, and you’ve got a racket with excellent spin that is easy to maneuverer.

For groundstrokes, the ball can shoot off the stringbed with great amounts of pace and topspin without any additional efforts from the player. Due to the manoeuvrability, the player can afford to take big swings and achieve higher depth with their topspin. On defence, players can rely on the racket for great depth and spin, making it easier to hit deep in the court for neutral balls. One can hit their groundstrokes with enough aggression and find their rhythm from the baseline.

Up at the net, The Yonex V Core 100 is agile and fast. Some users may want to add a little weight for added stability, but the ability to play aggressively with fast reaction shots is down to the lightness of the racket. Hitting the ball outside of the sweet spot can deplete the stability, feel and accuracy though. Unfortunately, this applies to regular play as well, as the racket can also feel quite stiff outside of the sweet spot. Perhaps some customisation can alleviate this issue.

Serving is effortless with the V Core 100, with great access to easy power and spin. It can be easily swung overhead, producing a wide variety of serves, including a wide serve at the deuce side and kick serves. For returns, it can be easy to overswing the racket, leading to inconsistent shots. The control can be a little jarring if players are used to rackets with more stability and control. If one can control their spin, against slow and heavy servers, The V Core 100 can produce great depth and keep opponents back at the baseline.

All in all, this racket is very fast and easy to use off the ground. Players can inject nice spin on their shots and during heavy hitting and the racket holds up with its crisp response. The V Core 100 allows you to move from defence to attack with ease, with the opportunities to play high trajectory spin balls and heavy shots from the baseline. Those who use stiffer rackets may find the control a bit jarring, but it offers the most power and comfort for club players in the VCORE series, thanks to the 300g weight and 16x19 string pattern for added spin and improved manoeuvrability, stability and comfort.